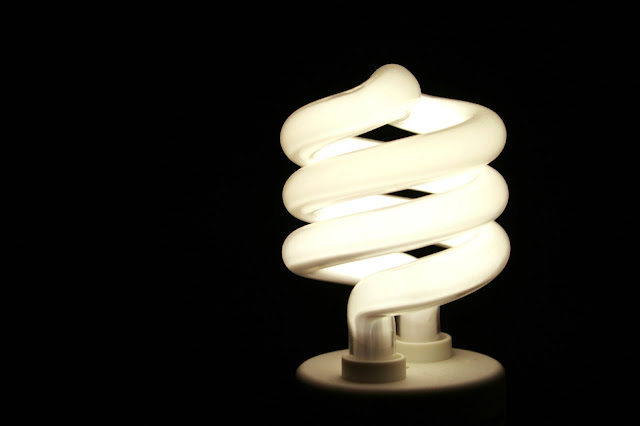 Fluorescent light tubes was introduced by General Electric at both the New York and San Francisco World Fairs in 1932.

Compact Fluorescent Light CFL was also developed by General Electric in 1973, but the 25 million dollars needed the build a factory was considered too expensive at the time so it was not produced outside the laboratory. The design was eventually copied by others. In 1995, helical CFLs, were manufactured in China and became commercially available. Since that time, their sales have steadily increased.

In 2005 the EU began phasing out incandescent light bulbs in favour of CFL’s the US followed in 2014. The rationale is energy sawing since the CFL are using less energy than the old-fashioned Edison incandescent lamp. However, the newer solid state Light Emitting Diodes L.E.D. technology is far more energy efficient. L.E.D lights use 80% less energy and has a lifespan approaching 40 years of continuous use and has no mercury.

Incandescent light bulbs emit a continues colour spectrum. The colours are in the yellow orange range, while fluorescent light emit limited colour bands predominantly in the blue green end of the spectrum. Natural light has a colour spectrum that range from violet to red and has far more colours compared to CFL light. 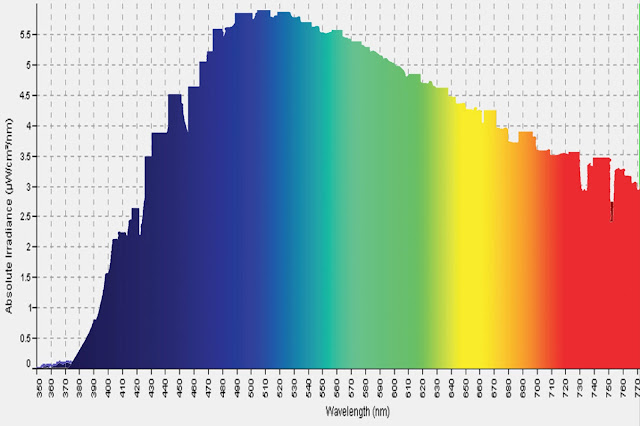 The colour spectrum of daylight at noon or D 55 standard. 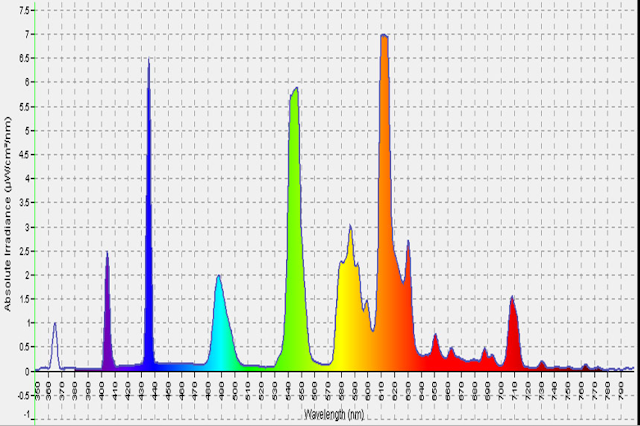 The colour spectrum of a typical Philips incandescent light bulb.

Since the colours or energy emitted by CFL is much less than that of daylight the eye can only respond to what”s available. The standard for describing the naturalness of lighting is the Colour Rendering Index (CRI). Daylight is of course the perfect light source, also known as the D55 standard, it has a CRI of 100. Fluorescent light has only CRI 50 at the low end and about CRI 70 of the better quality lamps.
The colour of a typical Full Spectrum Philips CFL.

Full spectrum fluorescent lamps has more coatings in order to become
closer to daylight. But the light is only a little better but still lack most of the natural colour spectrum.

CFL’s colour spectrum or CRI is at bet a compromise

The American magazine Popular Mechanics have made a comparison graphic illustrating the difference in colour temperature of light they tested.

Fluorescent light works by electrons emitted from a cathode at the end of the tube at a frequency just outside awareness. Similar to movie films which are still frames presented at a rate of 24 frames a second. We perceive this a motion picture.

The flickering is one of the reasons why working or studying in this light leads to eye strain and headaches. Studies shows that fluorescent light account for a 20% drop in academic performance. The flickering is also a factor in onset of ADHD in some children. Children are very sensitive to their visual environment and are disturbed by the flickering as well as the reduced colour spectrum under this light.

Each CFL’s contain about 3 mg mercury, so if broken this murky is released into the environment. Think about this, how many fluorescent lights and CFL’s are thrown out every day in the EU or in the US? Where does the mercury go? If the discarded bulbs end up in  a landfill it will eventually find its way into the ground water and so on. To set this into perspective, a resent analysis of breast milk on mothers in Australia they found that it contained DDT ( a pesticide that was banned in Australis in 1981 ). Mercury is a heavy metal and is poisonous, even in minute quantities.

There is also a problem with the electronics used to make the frequency with which the fluorescent light vibrate. Studies shows that school children achieve better academic results if the electronics at the end of each tube is shielded of with lead.

Today, L.E.D. lights can be manufactured so they emit colours at CRI 95, which is very close to the natural light. Currently people do not really know what CRI 95 lighting looks like. You can get an impression next time you pass by a jewellery store. Most likely they will use L.E.D. lighting to emphasis the goldenness of the jewellery. I have even seen rotating L.E.D. lights that makes the diamonds sparkle. More and more restaurants and retailers are using so called smart L.E.D. lights that can control colour temperature as well as brightness. 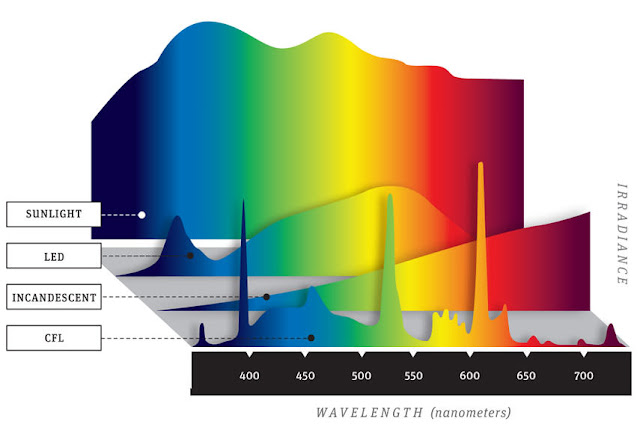 At night our eyes become much more sensitive to blue light. Therefore lighting at night needs to be warmer and less blue. The eye will perceive the colours as normal in daylight.

In museums expensive paintings of old masters are illuminated by 2,500 K li an low light environment. Yet the colours appear to be as the master wanted. The warm light is less damaging the the pigments used in the painting.

CFL’s and regular fluorescent light tubes emit high levels of blue light. This is what give them the brightness. However, exposure to be light (especially 460 nm ) can overexpose the rod cells in the eyes. Over time that may lead to Macular degeneration and ultimately blindness. Blue light has a higher frequency and therefore the most energy and capacity for damage. When light hurts your eyes it is most likely the blue light part of the spectrum that causes the discomfort.

Popular posts from this blog 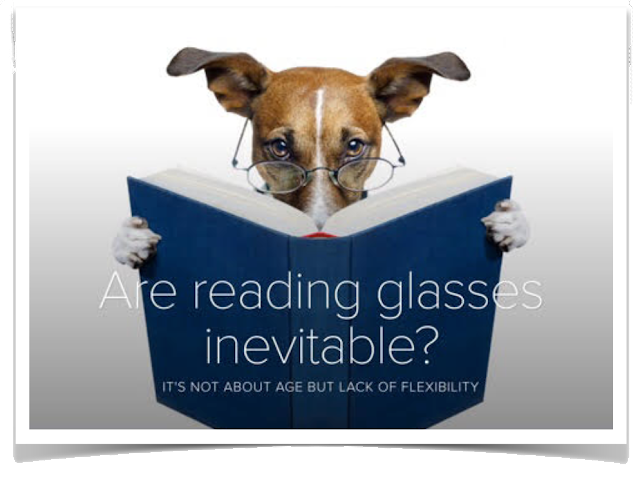 First it become difficult to read menus in dimply lit restaurants. Then you notice that you need to hold the newspaper further away. Next you begin to wonder why they print books and magazines using such small fonts. You are experiencing the beginning of presbyopia the need for reading glasses. The need for reading glasses starts in your mid 40's. It is considered inevitable that you will need reading glasses in your early 50's. The main theories upon which this is based originated with the Dutch ophthalmologist Donders (1863) who suggested that the cilliar muscle around the lens might lose its strength as you get older. German scientist Helmholtz (1866) suggested that the lens might become harder as you get older, so it gradually lost its ability to focus. The above theories are what you are told when you ask why do I need reading glasses? At age 35 your lens has lost 50% of its flexibility, at 40 your lens has lost 75% and if you are over 50 years old your lens is supp
Read more

Eye doctors generally believe that astigmatism is mostly inherited and perhaps partly environmentally caused. They also believe that it does not go away and will probably get worse over time. While the aim of the vision-training astigmatism exercise is to eliminate corneal astigmatism by releasing the tension, it is useful to understand the way astigmatism is corrected with glasses, contact lenses or surgery. First some historical background. Sir Isaac Newton, who himself appears to have been astigmatic, first considered this question of astigmatism in 1727. Seventy years later, in 1801, the renowned scientist Thomas Young investigated astigmatism in detail. Young is reported to have had 1.7 diopters astigmatism. It was Cambridge astronomer Airy (1827) who was the first to correct the astigmatism with a cylindrical lens. However, it was the invention of the keratometer by Helmholtz in 1856 and the treaties of Donders in 1864, “Astigmatism and Cylindrical Lenses,” that put astig
Read more
- February 05, 2018 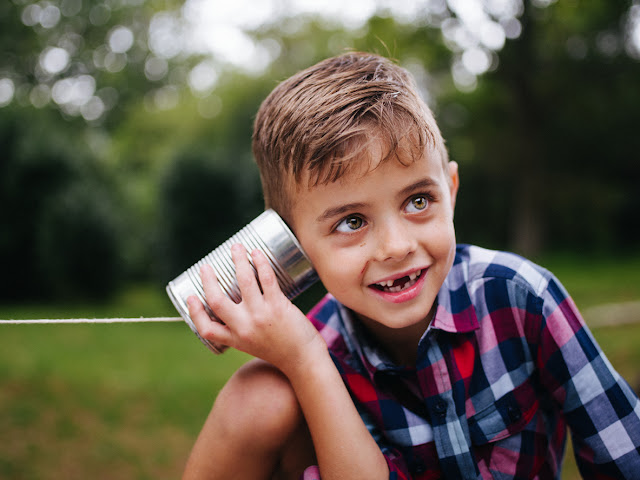 Why Haven't I Heard About This Before?   Surprisingly, training your eyesight for vision improvement isn’t something new. It has been used since the early 1900's.   It all started when Helmholtz published his paper about accommodation and lens focus in 1885. According to Helmholtz, when the eye needs to focus on something close by, the ciliary muscle surrounding the lens contracts, causing the lens to expand. An expanded lens can focus on nearby objects.   What is wrong with the picture that Helmholtz painted for us all those years ago? It assumes that when the eye focuses, only the ciliary muscle is involved in the process.   Let us look at something like walking. A combination of muscles work together to make it possible for us to walk. Not only are the muscles help you move, they are also maintaining your balance while you do.   All the activities are coordinated by the brain, which controls the various muscles by signaling them when to contract or relax an
Read more